How I Became a Custom Wedding Dress Designer

Thank you so much for taking the time to stop by my blog! Last week a client of mine pointed out that I don’t have much about myself on my website. She was interested in my story and wanted to know how I became a custom wedding dress designer.

My story begins when I was a little girl growing up in South Korea where I had dreamed of being a painter. I would spend hours drawing and painting and dreamed of doing it as my career. But as I grew older, I turned my career aspirations to architecture since to me it was a way of experimenting with design and construction using artistic skills on a very large scale. However, when I started looking into schools for architecture, I realized that there were not many architecture classes that focused on the artistic side rather than on construction. So, the next natural place I turned to was fashion design.

Once I decided to go to school for fashion, I never looked back. I did all of my formal study in South Korea, which included a four-year bachelor degree in clothing and textiles, and a two and half year masters in fashion design.

After school, I left South Korea and went to New Zealand to learn English. I had originally planned on staying only for one year, but New Zealand ended up winning my heart, and I wanted to stay in that beautiful country.

So I started my professional career in fashion in Auckland. My first position was as a production assistant. But, after feeling like I needed more of a creative outlet, I moved into a new role as a merchandiser in a large women’s wear brand where I learned everything about the fashion industry from A to Z.

With years of experience in various aspects of the fashion industry, I eventually found a position where I could use my artistic background, and took a designer position for a brand specializing in women’s occasional wear. I trained myself to be a successful commercial designer who can create attractive and wearable collections for a sophisticated market.

But my adventurous life wasn’t over! After living in New Zealand for over 8 years, I found it was time to move on. I met my American husband on a business trip to the United States, and I soon relocated to Asheville, North Carolina. I started my own company, “Angela Kim Designs” and made my debut at Asheville Fashion Week in the summer of 2015. 2016 was busy with fashion shows in Charlotte and around the South. I also entered the 2016 Southern Designers Showcase competition held by Belk, where I became one of the finalists.

As I continued running my own fashion design company, it became very clear that designing for mass production wasn’t my passion. And I wanted to do my part for being a responsible designer by not creating unnecessary waste and leaving a minimal environmental footprint.   I wanted to bring back a traditional way of creating one-of-a kind luxury clothing.

Angela Kim Couture was born to pursue my goal as a designer to work on a more personal level using my full skill set. I love the process of creating couture dresses that are truly one-of–a- kind and handcrafted for each client.  But it’s not only about making pretty dresses, it’s also about helping people solve a problem.

Creating the most precious memories during a wedding planning time is so rewarding.  I knew after I created my first bridal gown, I had finally found my calling as a custom wedding dress designer. 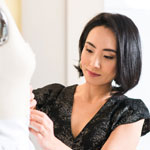 Angela Kim has worked in fashion internationally for over 20 years. She created Angela Kim Couture in 2017 and now specializes exclusively in custom wedding dress design.